Worried about the iOS 14 rollout? We experimented with our own apps to analyze the potential impact of the new privacy-focused permissions

App developers and advertisers, get ready – the rest of iOS 14’s new privacy-focused features are coming. Last fall, Apple released iOS 14 and introduced new features that aim to give users more granular control over how and when apps can collect their data.

To better gauge how the new privacy features will impact our owned-and-operated apps, Foursquare decided to run several experiments that tested how users responded to the new location permissions as well as the Apple AppTrackingTransparency framework (ATT) – which will be rolled out to all apps in the coming months.

Check out what we learned:

Experiment #1: Examining users’ response to the “Precise” vs. “Approximate” location and “Always Allow” vs. “Only While Using” location permission prompts.

With the roll-out of iOS 13 in 2019, users were given the ability to decide to “Always Allow” an app to use their location or only “Allow While Using App.” In the fall of 2020, user control of location data sharing got even more granular, with users now able to choose between sharing their “Precise” location data or “Approximate.”

To understand the impact the new permissions had on our apps, we analyzed the location opt-in rates of our users over the course of November 2020.

Here’s what we found:

Taking a deeper look at the number of users who selected either “Always On” or “While Using,” we found that 87% of users opted in to sharing their location. This high opt-in rate is likely due to the majority of users understanding that in order to use our apps to search for and discover places around you, the app needs to be able to use your precise location. We are also leveraging the two-step location permission flow (introduced with iOS 13.2) to clearly explain to users why we need to use their location in the background and why sharing their location benefits them. It should also be noted that the prompts for choosing between “Precise” and “Approximate” – which are designed and deployed by Apple – are not as prominent as the modal for “Allow Once”, “Allow While Using App”, or “Don’t Allow” permission step. As a result, it’s possible that users simply miss the prompt or do not clearly understand that they can switch the setting to “Approximate.”

Experiment #2: Examining the impact of users determining their data collection permission settings for data collected by the device’s Identifier Device For Apple (IDFA)

Starting in early 2021, Apple will roll out its AppTrackingTransparency (ATT) mechanism that will tell users “[APP NAME] would like to track you across apps and websites owned by other companies.” While the language in this message is set in stone by Apple, app developers can create a primer message that appears before the ATT. To determine whether the language used in the primer message could impact whether a user decided to grant IDFA permissions, we released the ATT mechanism to 50,000 City Guide users, changing the language in the custom primer prompt to see if different phrasing gleaned different results. 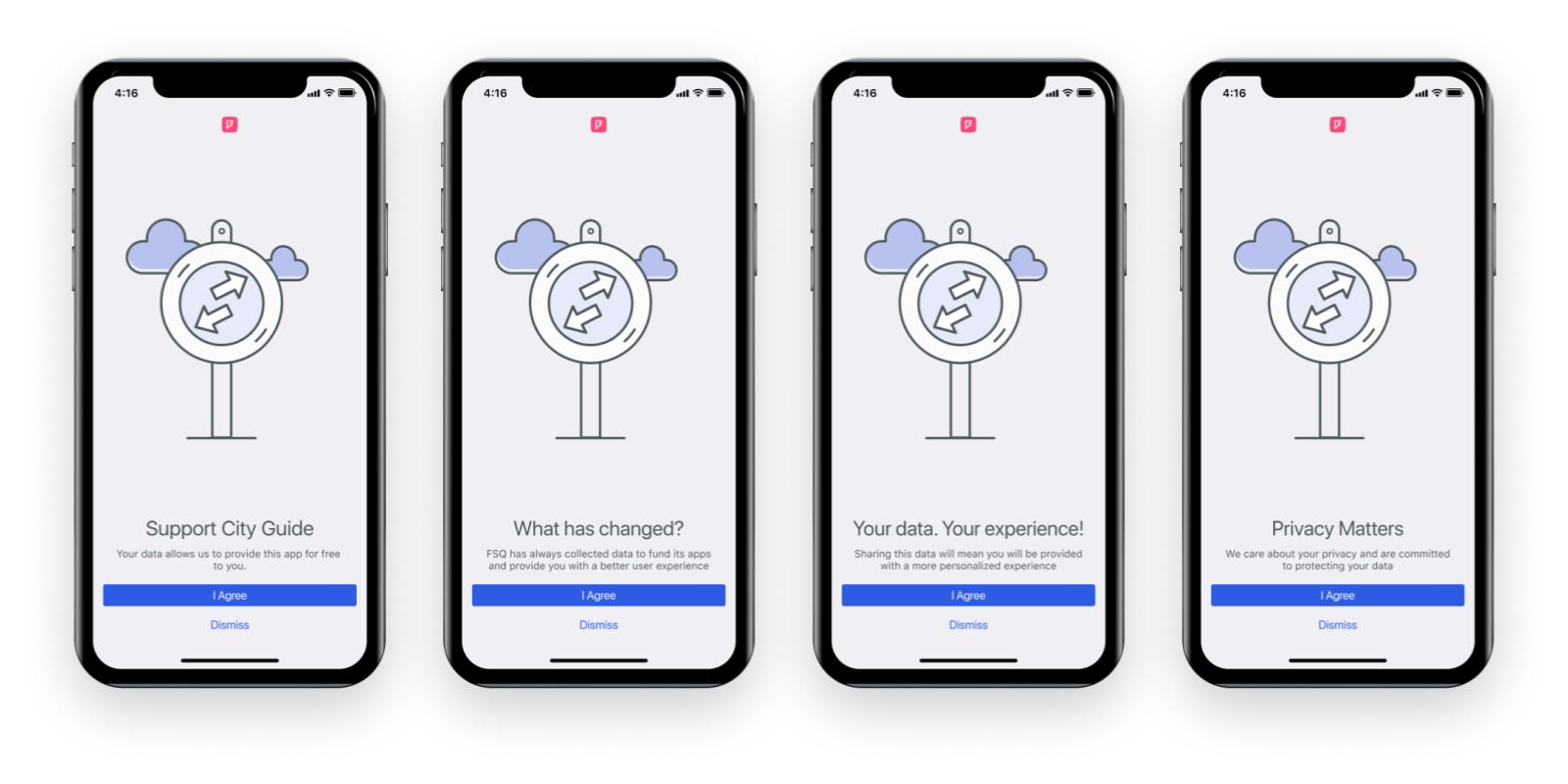 Here’s what we found:

What do our findings mean for other app developers?

While it’s too early to draw any firm conclusions about the impacts, we recommend that app developers start thinking about what value they’re offering to their users who choose to share their location and IDFA with them and experiment with how best to articulate that message in a primer that appears ahead of iOS permission prompt. Our advice? The simpler the message, the better.

One final thought on iOS 14 IDFA

Developers may also want to consider alternatives to IDFA for user identity. Some developers are adding a login mechanism that would allow the use of a phone number or email address as an identifier instead of IDFA. Pilgrim SDK 3.0, when released in January, will support multiple unique identifiers as an alternative to IDFA.

Note that if you (as a publisher) are planning to share users’ unique identifier data with a third-party, you will need to surface Apple ATT prompt to users in order to obtain their consent no matter what type of unique identifier you will use.

Keep an eye on the Foursquare Blog, Twitter, and LinkedIn for more upcoming Foursquare news, including the release of Pilgrim SDK 3.0 in January 2021.